The Environment Agency (EA) has announced that continuing to build up flood defences to protect vulnerable coastal communities may no longer be sustainable in parts of England.  Reports state that the combined effects of climate change and population growth would mean the number of properties built in floodplains would double in the next 50 years.  Motion’s Richard Bettridge argues that civil engineers are key to the solution.

In its consultation report ‘Draft National Flood and Coastal Erosion Risk Management Strategy for England’, the EA estimates that more than five million properties in England are at risk from flooding or coastal erosion.  Many more businesses and consumers would be affected by interruptions to essential transport services and damaged water infrastructure, caused by flooding or coastal change incidents. 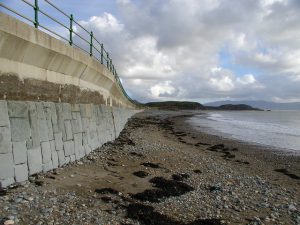 The draft paper covers a range of measures, such as the construction of homes that can be restored quickly after being flooded.  It also explores how households and businesses may recover faster with ‘build back better’ initiatives.  Empowering local communities with ‘adapt and respond’ decision-making control is the central theme of the document.

Reinforcing or raising sea defences may not be sustainable in the long term, due to climate change.  However, the cost of evacuating entire communities in flood-prone areas is equally unsustainable.

Measures to curb sea level rise will play their part, but the following suggestions may also help:

The definition of Civil Engineering is: “The art of directing the great sources of power in Nature for the use and convenience of man”.  Engineers should, therefore, embrace the challenges that climate change and coastal erosion pose.

Motion’s infrastructure design team has many years of experience providing pragmatic advice to help a wide range of clients manage the complex interrelation of property development, drainage and flood risk.  Call 01483 531300 to speak to an expert.

To keep up to date with our news, follow us on social media: